At first glance, they may not seem like the most natural of pairings, but they come together with beauty and grace, introducing thousands of new audience members to their respective art forms.

Circus Flora has thrice partnered to great acclaim with the St. Louis Symphony, bringing a distinctive theatrical circus production to the stage at Powell Hall. The result has been moving artistic creations evoking the beauty of each time-honored craft.

Each of these productions has drawn fans both of Circus Flora and the St. Louis Symphony. In total, over 6,000 attended four performances of the 2014 winter production, including 488 new buyer households. 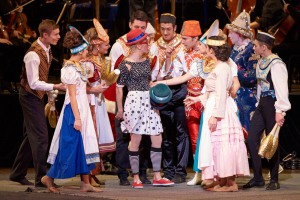 In December of 2014, Circus Flora collaborated with both the St. Louis Symphony and Illinois Symphony Orchestra to craft an all new story, A Winter Fable, for audiences eager to experience yet more of this collaborative new art form. An original fairy tale, set in the high Tatras Mountains, audiences journeyed to in the ancient and beautiful Kingdom of the Spiis. In true fairy tale form, a disgruntled enchantress sets a spell on the kingdom, transforming the inhabitants into fantastical creatures. Set to Eastern-European composers, including Bartok, Dvorak and Brahms, the kingdom is saved by a singing miniature horse named Galapoff.

In December 2012, Circus Flora again partnered with the STL Symphony to present A Child’s Christmas in Wales. Inspired by the spirited and nostalgic poem by Dylan Thomas, the special four-show engagement featured selections from Grieg, Bizet, and Tchaikovsky, among others, which married well to the sensibility of Thomas’ story. The performance showcased a dynamic Risley act (whereby one acrobat juggles another on his feet), youth acrobats, strong & graceful aeriaists, trained house cats, and the gravity-defying Flying Wallendas. 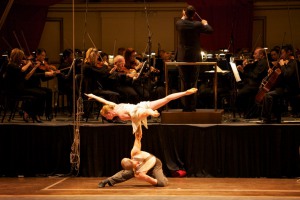 In January 2011, Circus Flora and the St. Louis Symphony presented The Floating Palace, the (true!) story of a boy who stowed away aboard a circus showboat that played up and down the Mississippi River in the 1850s. Through the lens of this narrative, Circus Flora’s artists performed to powerful and moving orchestra pieces meaningful to the story, notably works by American composer Copland.